I haven’t written in a while if you had read my previous posts my oldest daughter had been very ill this winter. After numerous tests including an MRI and a few ultrasounds, and X-rays. we were able to move the colonoscopy date up by a month. We anticipated an inflammatory bowel disease diagnosis, and she was even pre-enrolled in a study at Children’s Hospital for early IBD in children.

We were all hopeful, to finally receive a diagnosis with a plan to get Bree feeling better and back in school. The colonoscopy, however, showed everything was normal, which was great and upsetting at the same time.

We wanted Bree to start feeling better, and we had hoped this was our path to do so. Bree herself broke down in tears when we explained that everything looked totally normal and she didn’t have IBD. Bree didn’t want to have a chronic disease she just wanted some answers and to feel better. Bree couldn’t understand why the doctors at the top children’s hospital couldn’t figure out what was causing all her pain and inability to eat.

After Bree’s colonoscopy, she went from being sick to extremely sick the pain intensified the fevers went up, and she was so weak she could barely walk on her own. This landed us back in the ER where they weren’t concerned they basically said after speaking with the on call GI (who was the same GI who did her colonoscopy)  she needed to learn to function with the pain and follow up with her GI (who was the one who sent us to the ER). Luckily, her GI doctor believed that this was not functional pain and decided Bree needed to meet with a surgeon.

Finally, the surgeon had some answers for us the surgeon said the appendix was required to come out and that it’s possible she had a stone in her appendix and or a congenital band around her appendix. Bree’s surgery was scheduled for the next morning. 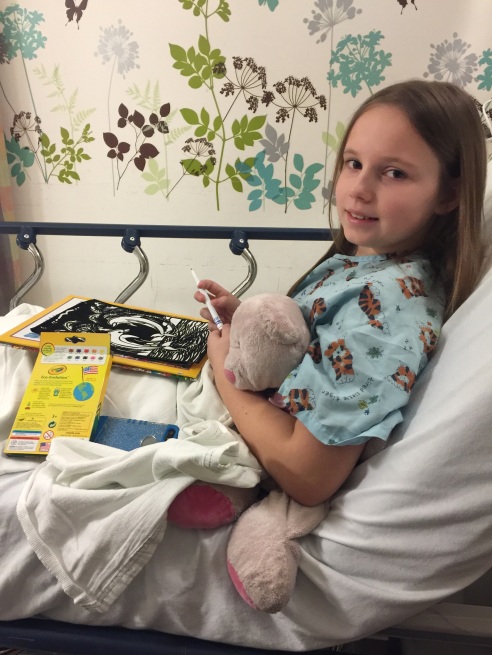 The surgery went fantastic, they found that Bree’s appendix had perforated at some point over the last two months creating scar tissue adhering to her appendix, colon, and abdominal wall. Finally, we had some answers!!!

The surgeon said the reason eating was so painful was that when the food passed through her colon, it would tug at all the scar tissue. The colonoscopy also increased her pain for the same reason, all the manipulating of her colon had been pulling the scar tissue and making things worse for the poor kid.

It was a tough recovery for Bree, she spent 9 days in the hospital and is now working on gaining her strength back. The best part is her right sided abdominal pain is finally gone, in fact, Bree noticed it the day after surgery.

I suppose I will always think of the what if’s… Today, I’m just happy to have this behind us and to get back to our normal routine. As you can imagine our schedules and everything have been crazy, which doesn’t go well for the other two schedule oriented autistic kiddos at home…

Published by the stressed nest

View all posts by the stressed nest